“Grandma’s Flat Feet” is also called “Adult Flat Feet”, that is, “Acquired Flat Feet”. Many people’s eyes are focused on flat feet in children, but in fact, flat feet are not only caused by congenital flat feet but also acquired flat feet. Therefore, the proportion of flat feet in adults is not low, especially in middle-aged and elderly women. This may be because women often get fat in middle-aged age, and women’s tendons, joints, ligaments, muscles… and other organs are smaller than men. Once they start to gain weight, the tendons and ligaments bear relatively more pressure than men. Bigger, over time, the arch of the foot has to say to you: “I’m tired!” So the relative rate of “adult flat feet” is higher than that of men.

After all, what kind of situation can cause acquired flat feet?

The key lies in “degeneration.” When it comes to degeneration, the first thing everyone thinks of is joints and cartilage, but few people would think that tendons would degenerate too! The main cause of acquired flat feet is “posterior tibial arch dysfunction”, which is the collapse of the arch caused by the degeneration of the posterior tibial tendon.

It must be emphasized that there is no congenital problem if it is not “acquired flat feet”. The degeneration of the posterior tibial tendon is similar to the “thumb valgus” mentioned before. Unless it is injured, it is usually due to some congenital flat feet. The tendency, but because of failure to detect or care, fail to actively treat, and then it will become proportionally worse over time. I often use the car as an analogy of the ankle. For a brand new sports car, if two of the tires are fully inflated and the other two tires “leak”, it is guaranteed that the drive and the wheel frame of the car must be driven off the highway. “The whole group is broken.” The same is true for the ankle. If the bone structure and axis are correct, and the power transmission is evenly distributed, the service life will naturally belong. Otherwise, of course, it will be easy to be reimbursed early.

Add gravity: obesity is often the last straw to crush a camel

Please pay attention to this: the ankle is an organ that bears the weight of our body within a square inch. The excessive burden will inevitably cause overload and injury to the ankle. Therefore, many diseases of the foot are inseparable from obesity. It’s no wonder that many foreign medical articles and professional websites put the topic of weight loss in the orthopedics category, rather than gastroenterology or metabolism. Therefore, to improve the musculoskeletal system, in addition to surgery and rehabilitation, I want to lose weight. Weight is probably one of the most positive practices. Remember, obesity is often the last straw to crush a camel.

Therefore, to avoid that you may have a tendency to be congenital, or even if you have a good congenital foundation, you cannot tolerate the long-term elastic fatigue under the condition of overloading. What’s more, the organ function will degenerate with age, considering many factors. , Absolutely must try to keep one’s weight in a good condition and avoid gravitational acceleration, which will cause one to set foot on the end of acquired flat feet-“joint damage” inadvertently!

Oh, yes, there is one point to be clarified here. Acquired flat feet tend to occur in middle-aged and elderly women in Taiwan. In addition to the “heavyweight” cause, there is also something related to overwork. Mothers in Taiwan suffer hardship. No. 1 in the world, please remember to love your mother more, and don’t forget to say to your mother when you go home, “Thank you, Mom, you are so great!”

The first level: Inflammation, pain, but the foot has not been deformed. 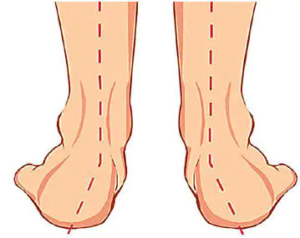 We usually advise patients to wear insoles and use drugs, rehabilitation, physical therapy, etc. for treatment.

The second level: Mobility deformation phenomenon; this refers to the patient’s flat feet are not obvious, usually only when force is stepped on the ground.

At this stage, the feet are not only inflamed but may also be broken and bone deformed. At this time, according to the patient’s condition, conservative treatment such as the first level or surgical correction can be taken.

The third level: immovable deformation; at this time, the patient not only deforms but also becomes stiff. Even when no force is applied, the flat feet are visible.
Conservative treatment for patients with grade 2 who feel that the effect is not good, or patients with stiff and hardened grade 3, need corrective surgery, because “adult flat feet” are not like “children’s flat feet”, and orthotics can be put in to wait for them. Natural improvement (subtalar joint restriction surgery), so be sure to correct the bent and deformed bones to a better position, such as osteotomy correction surgery, tendon strengthening (tightening excessively loose tendons), tendon transfer (Take another tendon to help hold the inner arch)…Level 4: The joint has been severely damaged.

If unfortunately, it has deteriorated to the fourth level, it is only necessary to “destroy first, then build”. Only by smashing and reconnecting all the broken joints can the symptoms of flat feet be improved. This is called “three-joint fusion”, but Flat feet are delayed until this time for medical treatment. There will inevitably be some disadvantages, such as long operation time, lower success rate, longer recovery time… etc.

The concept you must know!

Finally, regarding acquired flat feet, there are a few concepts that must be emphasized with you:

(1) The severity of acquired flat feet is gradual. Regardless of the first level, we may slowly evolve into the second level. If the second level is still ignored, it will become the third level, and finally, it will deteriorate to the fourth level, causing joint damage and necessitating fusion. It seems incredible to say that, but there are indeed many such cases. 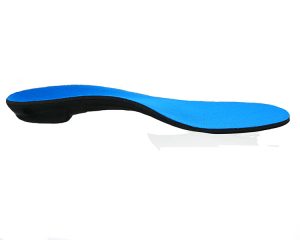 Therefore, do not take it lightly because the symptoms of flat feet were mild when you were a child, and do not pay attention to the phenomenon of flat feet when you grow up, to avoid missed treatment opportunities and cause lifelong regrets. And don’t have the misconception that “acquired flat feet” cannot be cured.

(2) The ankle is a very delicate organ, so you must seek professional advice during treatment. There was a patient who was only twenty years old. He had undergone an acquired flatfoot correction surgery in other hospitals. The result was two months after the procedure of “a steel nail inserted”. When he got out of bed, he walked around. It was broken in the joint, and the joint was damaged as a result. When I was here, I could only be treated with fusion. “I originally wanted to buy cinnamon, but later I found out that I was buying Yinxiang.” So it is best to seek a specialist in foot and ankle. opinion.

(3) Drag to the end can only be partially repaired. As mentioned in the previous point, the ankle is a very delicate organ. It is composed of 26 bones and has many small joints. After being damaged to a certain degree, it is impossible to deal with all the joints. At most, only one of them can be dealt with. The two more severely damaged joints cannot be like knees. As long as the artificial joint is replaced, the function can be restored to about 90%; in case the acquired flat feet are already severe to the fourth level, even after the three-joint fusion, If the original functional resilience of the foot and ankle can be increased from 30% to 70%, it can be regarded as a very big improvement. The patient must first understand this and be able to treat it as soon as possible. Don’t “delay”!